"We are the RUINED KNIGHTS"

The Ruined Knights are the first miniboss of TS!Underswap. They are a trio of bug-like monsters who hunt down fallen humans to protect monsterkind.

The Ruined Knights are a trio of Whimsun-esque monsters. Their armor consists of helmets with unique symbols, chest plates with different parts of the Delta Rune, and red capes.

Karapaes (left) is a narcissistic monster who adores praise. His speaking quirk involves saying "Aha~!" at the start of every sentence.

Scutler (middle) is a monster focused on his role as a defender of justice. He seems to take his job very seriously, even feeling like his teammates betrayed him when spared by Chara. Despite this, Scutler cares a lot about his comrades.

Ballard (right) is a brooding and secretive monster who forces himself to be someone else as to not disappoint his teammates. However, when sparing him, Chara helps him realize his friends will accept him for who he really is.

The Ruined Knights are first encountered at the Puzzle Gauntlet's midpoint in Ruined Home, where they've set up a "human capture bridge." Upon stepping onto this bridge, retracted spikes on both sides will suddenly trap the player, and the Ruined Knights will introduce themselves to Chara. Their dialogue changes based on whether or not Chara has killed any monsters--pacifism will result in them lamenting on their situation trapped underground, while violence will result in them being furious at Chara for killing monsters. Either way, they will promptly initiate a battle. Upon sparing them, they will thank Chara for helping them realize things about themselves, and leave to spend time with one another.

If spared, they can later be found in the last section of The City of Old, having a picnic together. They thank Chara once more, and comment on their relationship with one another.

Journal page if killed on a Genocide run. 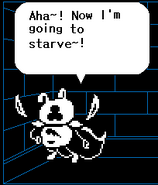 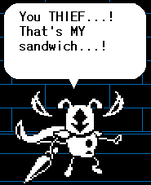 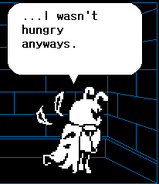