?
Sir Scratchalot is a robotic DJ/radio show host, and a major character encountered in TS!Underswap.

As a robot, Sir Scratchalot is composed of a head in the shape of a speaker with a screen displaying his face, a torso with two metallic arms, and a wheel for moving around. His face is composed by a handlebar mustache and two eyes, the left one having a monocle over it. He carries a staff, and wears a blue top hat and cape, resembling a 1900's Sack Suit.

While not much is known about Sir Scratchalot's behavior, it has been confirmed by the developers that he will have "old timey" characteristics. 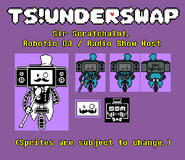